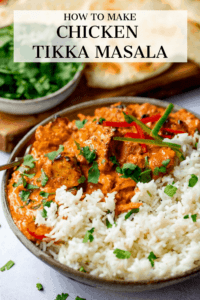 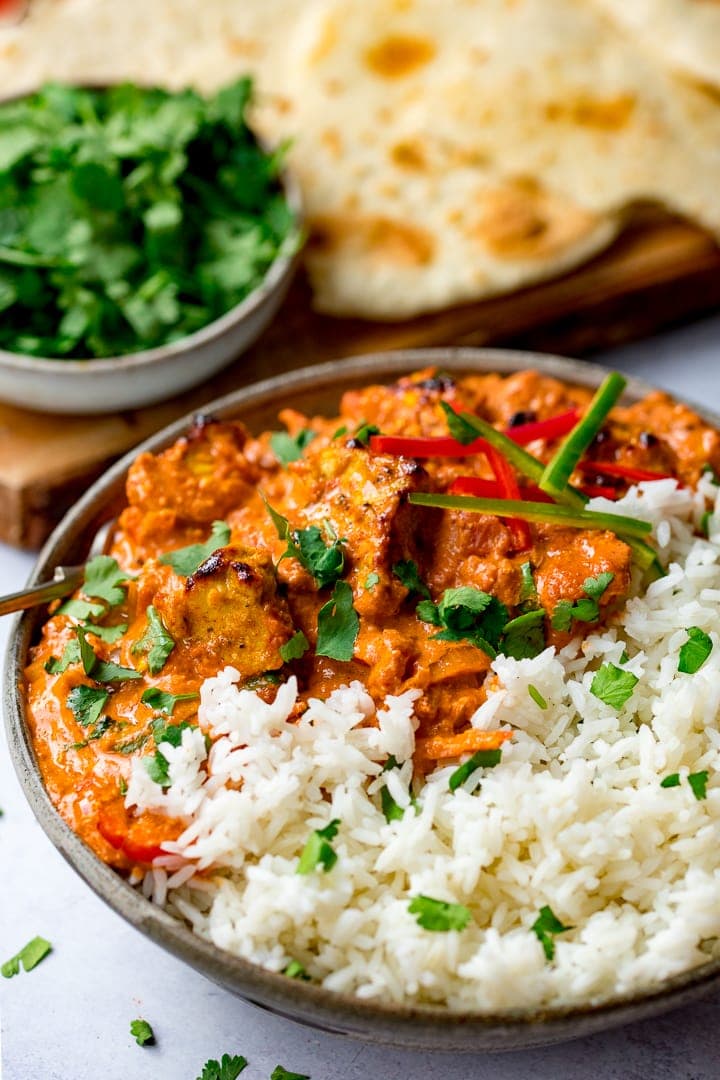 Not exactly a classic Indian Chicken Curry – the world famous classic chicken tikka masala (well, the sauce anyway) was invented in Glasgow of all places, in the 1970s by a Bangladeshi chef.

Supposedly it was created to appease a customer who complained his chicken was too dry!

Now it’s loved all around the world! My kids order it EVERY time we go out for Indian, and Chris and I always sneak a bite to go with our spicier curries. 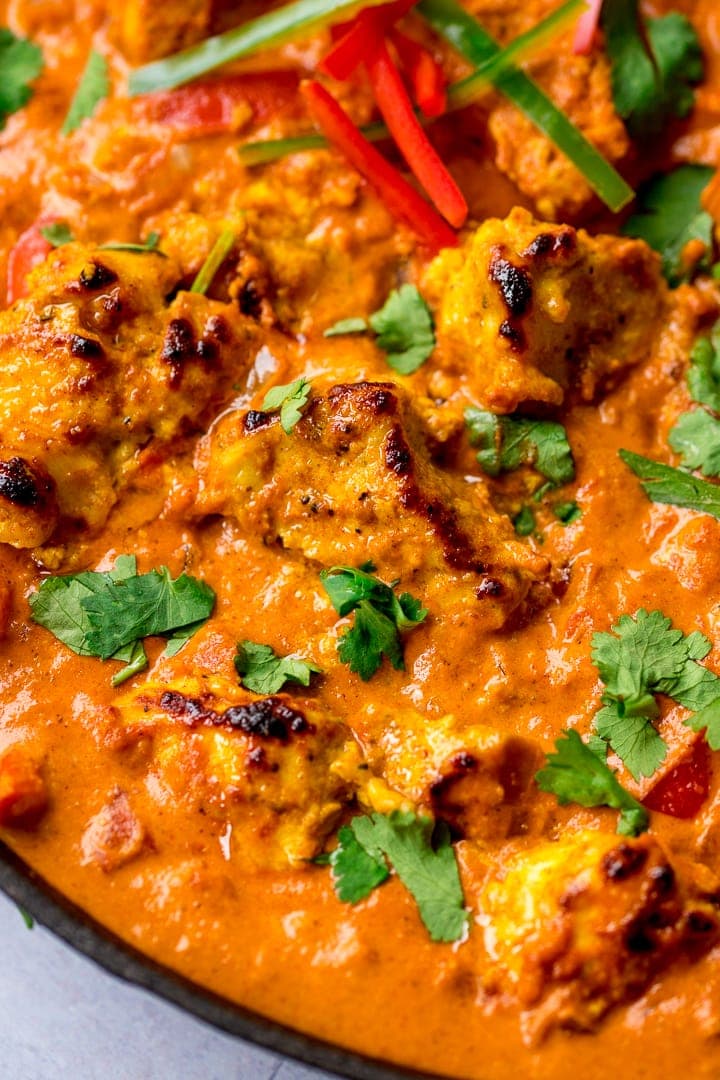 We start by marinating the chicken in a mixture of yogurt and spices. It needs to marinade for at least a couple of hours, to really tenderize the chicken, so it can be grilled or griddled later without drying out. 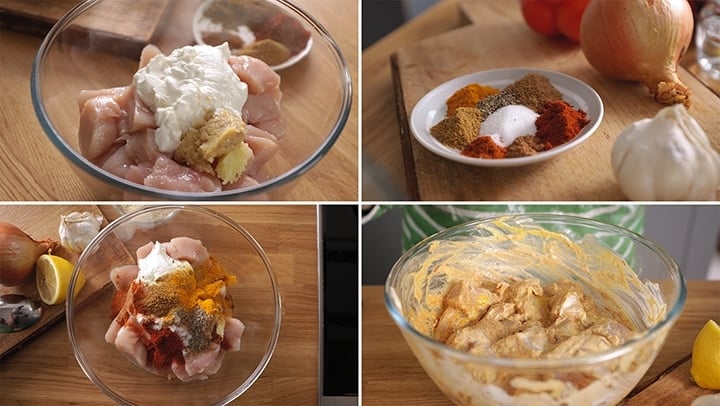 Next we start on the sauce by softening onions in a pan with a little oil and butter. Add garlic, ginger, garam masala, ground coriander, paprika, cumin, cinnamon and tomato puree and stir it all together.
At this point I like to add in a chopped red pepper. This is totally optional, and definitely not an authentic addition, but I like to add in a little veg where I can get away with it.
Then add in tinned tomatoes and water and let it simmer for 15-20 minutes while you cook the chicken. 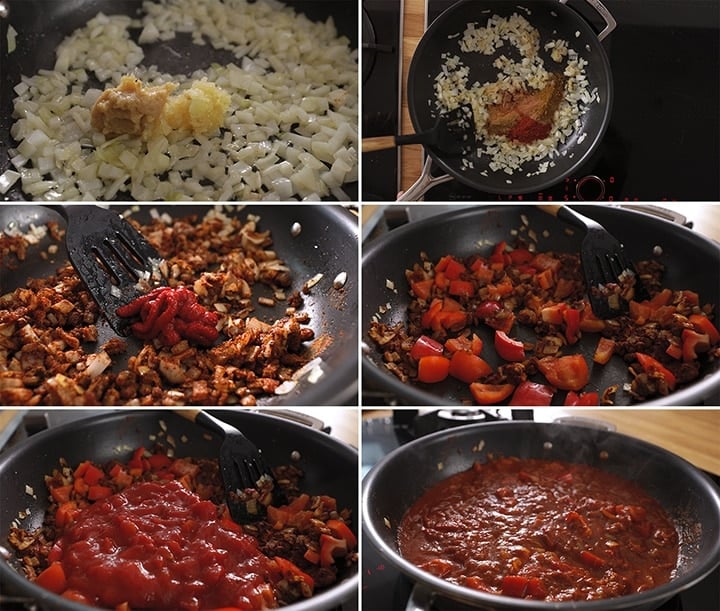 You can cook the chicken on a griddle or barbecue on skewers, or if you want to keep it simple, like I do, then spread the chicken out on a tray, brush with oil and grill until lightly charred. If the pieces aren’t too big, you shouldn’t need to turn them to cook them through.
Now stir cream, ground almonds and a little brown sugar in the the sauce, and add in that cooked chicken. Give it all a stir and heat the cream through for a couple of minutes, then serve. 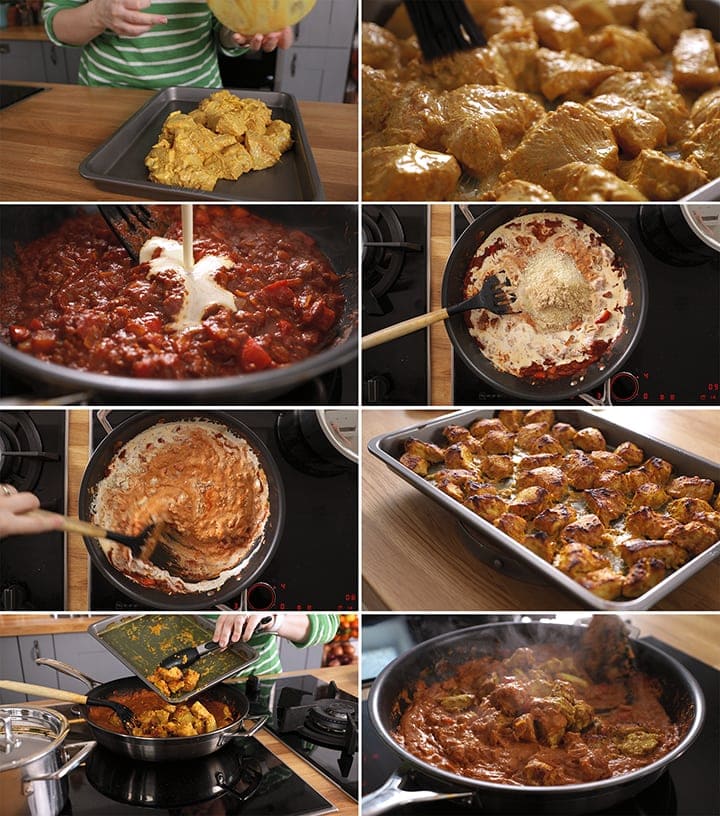 I like to serve mine with boiled rice (<– check out my no-fail rice post) and/or chapatis (<–super quick and easy).

Add in 1-2 tsp of hot chilli powder with the spice ingredients when you’re making the sauce. Alternatively, you can add in 1-2 fresh red chillies (finely chopped) when you add in the red bell peppers. Or you could do both if you like it really spicy!

I tend to stick with the mild version, as the kids prefer it, but then Chris and I will sprinkle on a some finely chopped fresh red chilli, or a pinch of chilli flakes at the end. 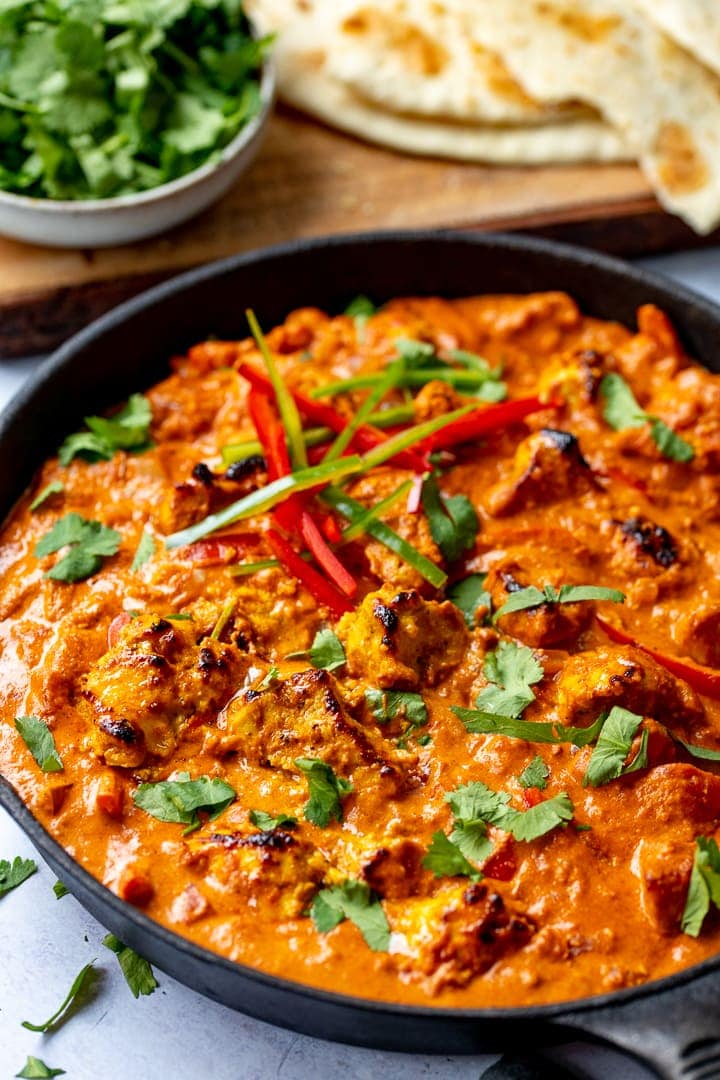 Love a good curry? Here are some more curry recipes:

Also, a head’s up for Thanksgiving and Christmas leftovers – try my Leftover Turkey Tikka Masala! 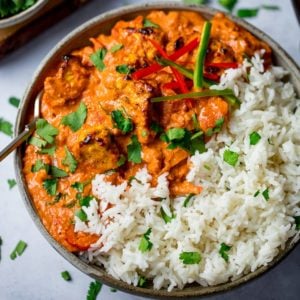 Cooking the chicken - grill or griddle?

I like to cook my chicken on a baking sheet under the grill.
If you prefer to griddle or barbecue the chicken, you can thread the chicken pieces onto four long metal skewers (you can use wooden skewers if you prefer, but soak them in water for at least an hour beforehand to prevent them from burning). Cook for 8-10 minutes, turning occasionally until no longer pink in the middle.

I use chicken breasts for this recipe, as I find them a lot less fiddly to chop up and prepare.
Chicken thighs tend to retain their juiciness a little more than chicken breast, but we're marinading the chicken breast, which will help to tenderize it and retain it's juiciness when it's being grilled.

Can I make Chicken Tikka Masala ahead?

The chicken is at it's smokiest and juiciest when eaten straight away, but yes, you can cook this dish ahead and reheat later if you like.

You've got a couple of options:

Can I freeze Chicken Tikka Masala?

Yes, make the whole dish ahead and stir the chicken into the sauce, then cool, cover and freeze. Defrost in the refrigerator overnight, then reheat, in a pan, stirring regularly until piping hot throughout.

Nutritional Information is per serving - not including rice.