Minimal effort is required for my easy baked ham with brown sugar and mustard glaze! 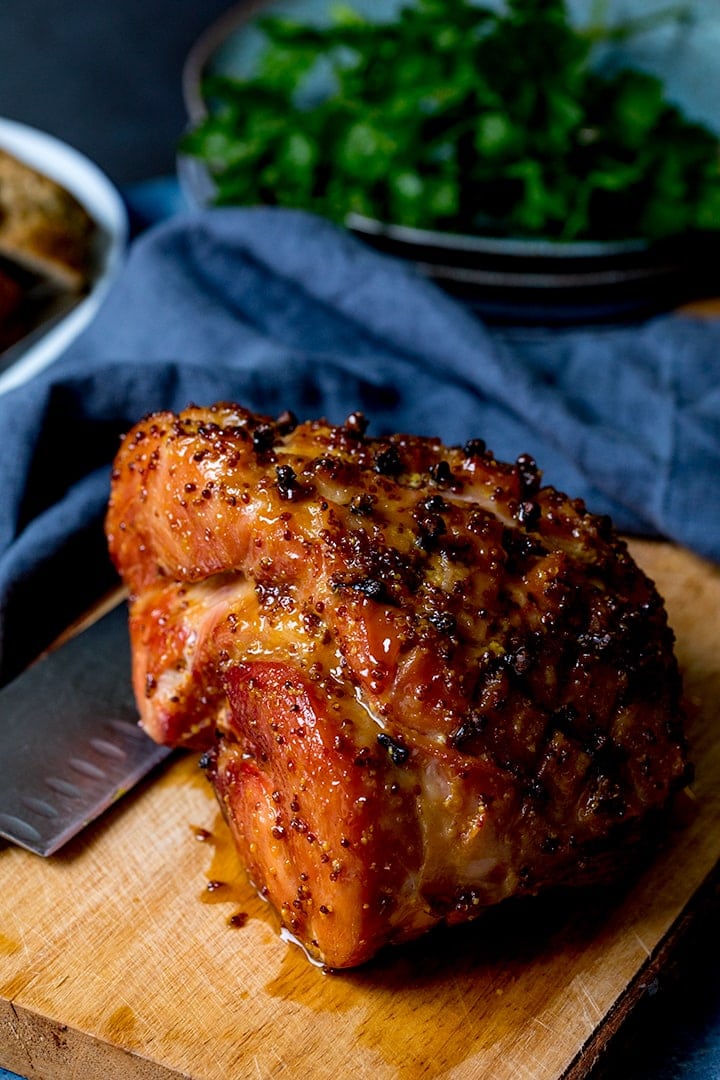 I know those huge joints of ham with the bone in look impressive, but 5 kilos of ham can be a little too much - unless you're having a big party or you're happy to eat ham butties for the next 6 months.

This recipe uses a regular gammon joint (about 1.4kg/3 pounds) that you can buy from most supermarkets at a reasonable price (ours was £11). For us, that was enough for dinner, sandwiches for the next couple of days and an extra portion to put away for another meal (such as fried rice, or ham and cheddar croquettes). 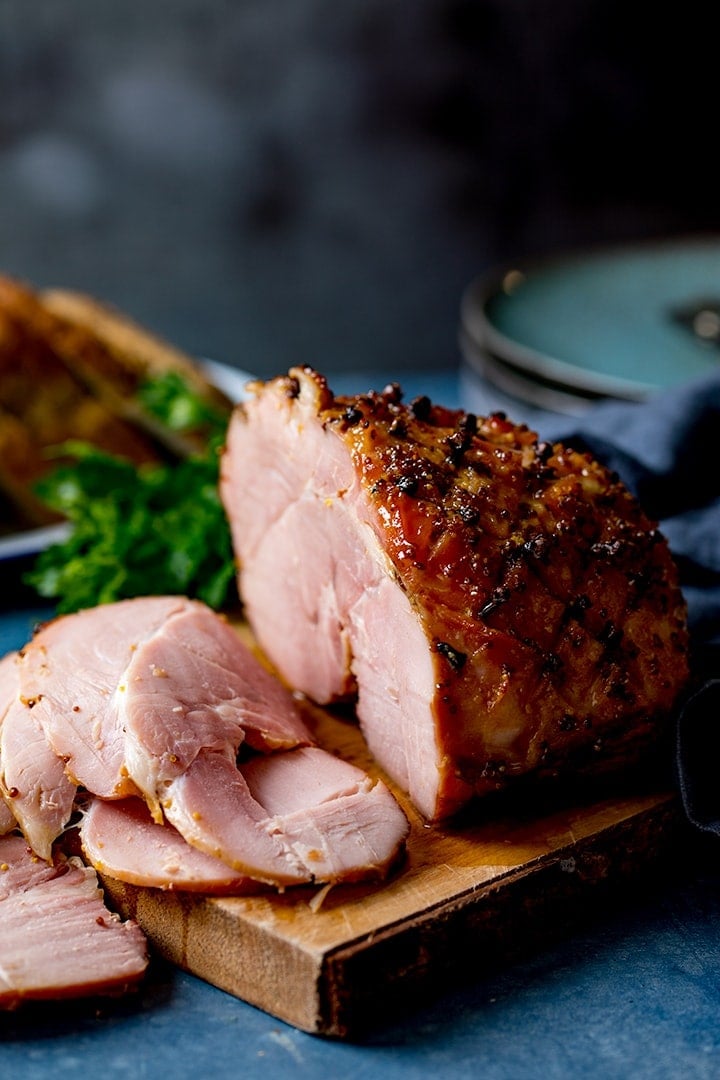 We start by placing the gammon joint in a large pan. Cover with water, a quartered onion, peppercorns and bay leaves. Bring to the boil and simmer for 20 minutes per pound. So a 1.4kg/3 pound gammon joint should take 1 hour.

Remove the ham from the pan and leave to cool on a chopping board for a few minutes. Then remove the skin using a sharp knife. Try to leave as much of the fat as possible behind, as this will help to keep the ham moist and will add flavour.

Score the ham, then brush on a mixture of brown sugar, dijon mustard, wholegrain mustard and spiced rum.

Place in the oven  at 190C/375F for 20 minutes, basting with more of the mustard glaze half-way through cooking. 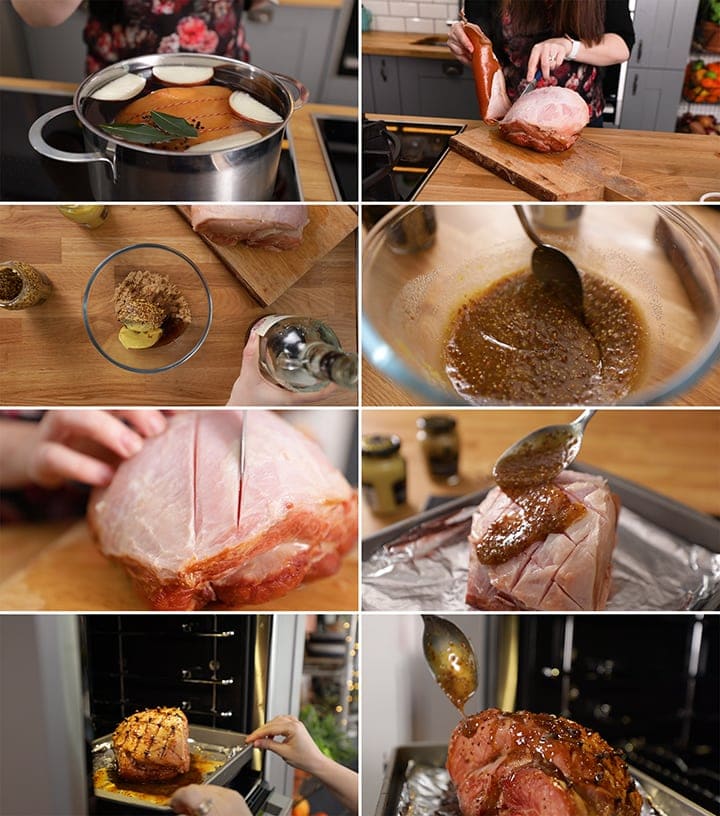 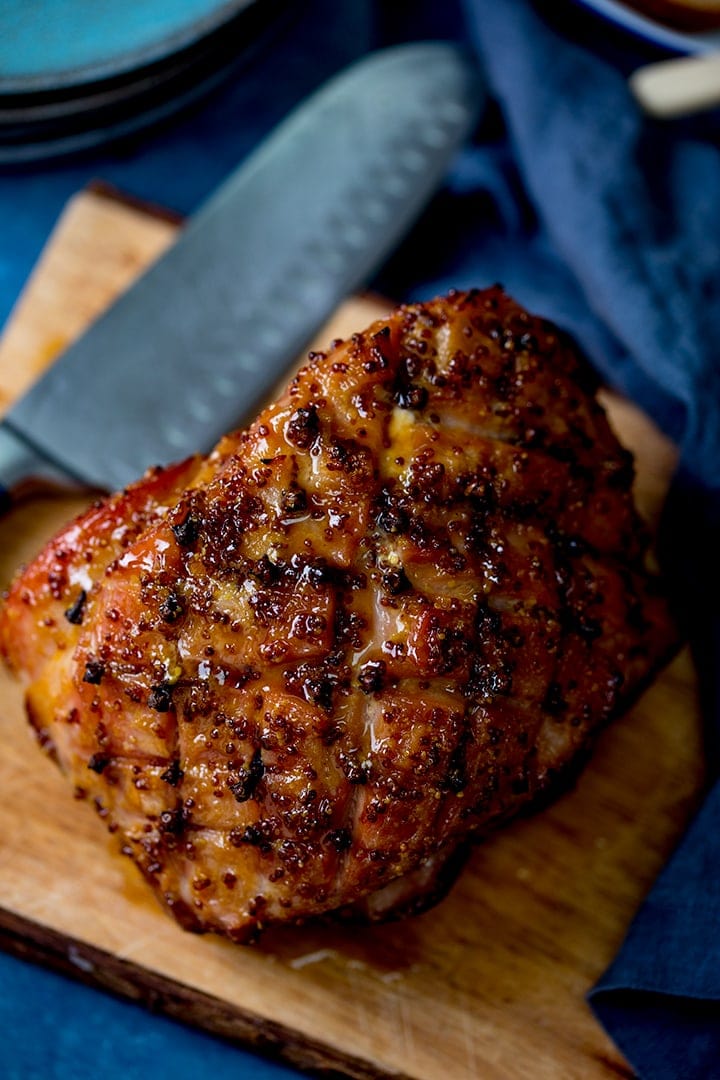 Difference between gammon and ham

Gammon is basically ham before it has been cooked. Gammon (which is a cut of meat from the hind leg of a pig) is cured - usually in brine or using a dry salt method (similar to bacon). This curing process preserves the gammon and develops the pink texture. The gammon then needs to be cooked before being eaten. Once cooked, it will be ham. You can slice it and serve it as you would with ready-sliced ham from the deli counter.

This gammon/ham differentiation can be a little confusing as, in the UK at least, a popular pub dish is gammon and chips. No, we don't serve up raw gammon with our chips. It's simply a thick slice that has been taken off the gammon joint before being cooked. Then it's fried or grilled. This is known a gammon steak (but I guess really it's a 'ham' steak).

Personally I prefer smoked, as it has a greater depth of flavour, but go with what you prefer.

You can do the boiling stage in a slow cooker if you prefer. Simply add the gammon to the slow cooker, cover with just-boiled water, the quartered onion, peppercorns and bay leaves. Then cook on High for 4-5 hours or Low for 6-7 hours. Then drain, glaze and bake in the oven as per the regular recipe.

Quickly cool, cover and refrigerate leftover ham. It should keep for 3 days.

You can also freeze chunks/cubes of ham. Defrost them in the refrigerator overnight, then add other recipes - cooking the meat until piping hot throughout. See some ideas for this below.

Leftover ham is great in :

Personally I love a brown sugar and mustard glaze, but you could replace the sugar with honey if you prefer. You could also: 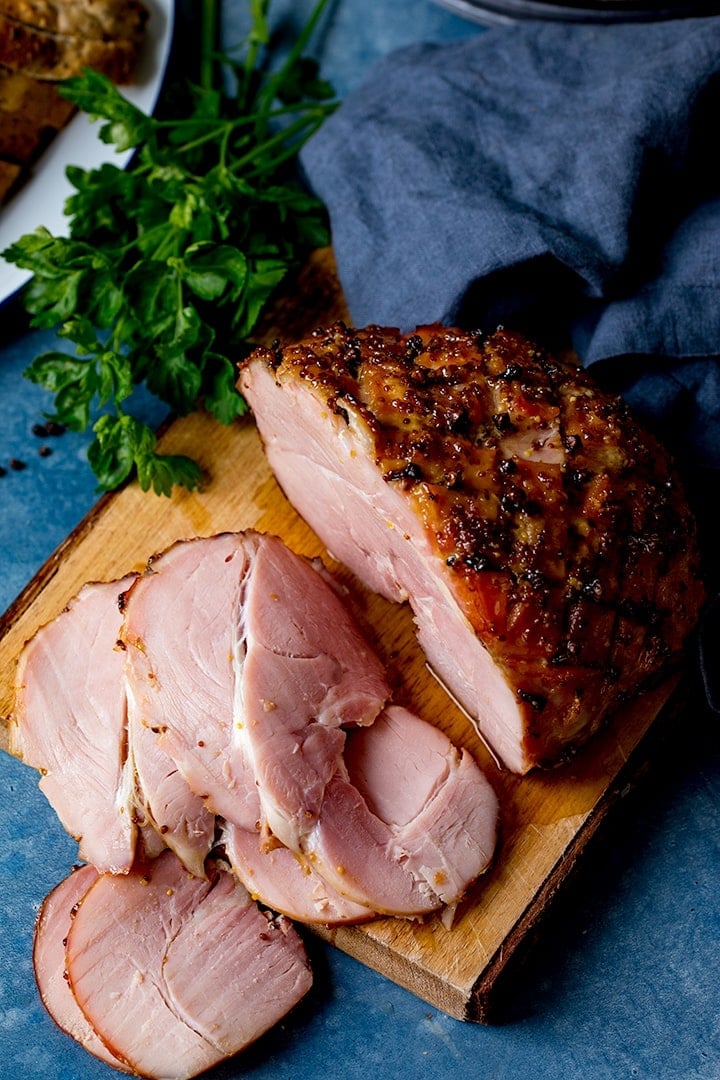 The Baked Ham with Brown Sugar and Mustard Glaze Recipe: 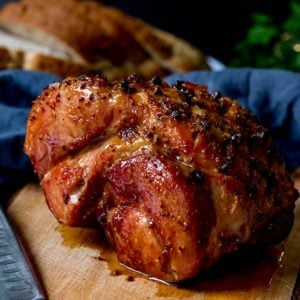 Nutritional information is per serving. There are approx. 12 servings in this recipe.