Bacon and Egg stuffed potatoes make such a good brunch, and they're great when you're cooking for a crowd. Check out my tip below to make sure your yolk stays lovely and runny. 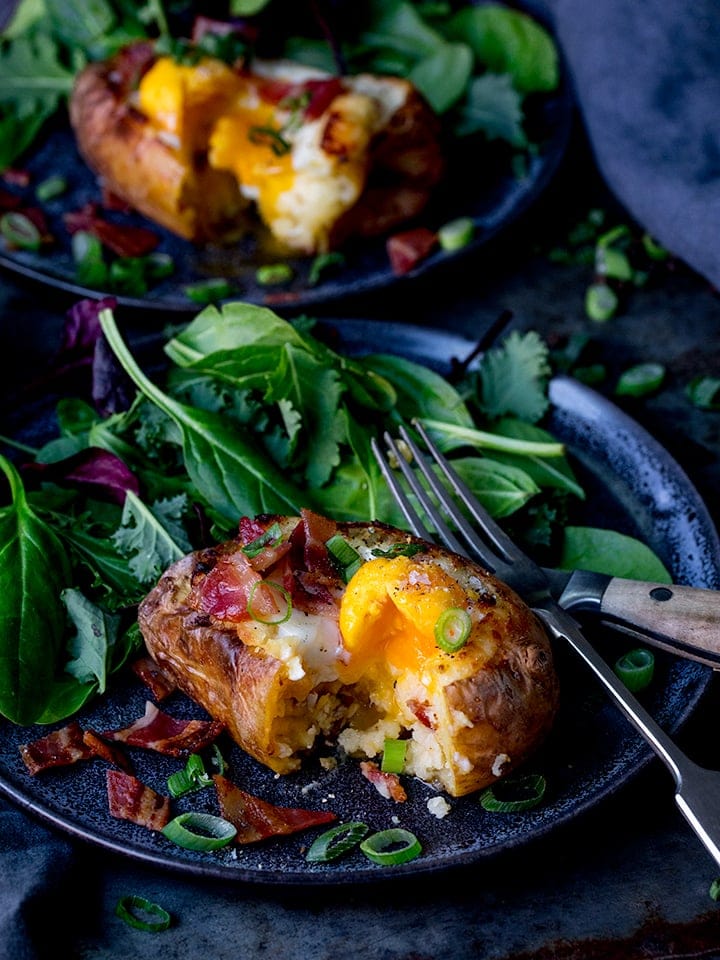 I posted the recipe for those ones when I first started the blog here. If you want to see the worst food photography in the world, you should definitely go and check them out. I really should re-shoot them at some point!

Anyway, these are pretty similar, except I'm using full-size baking potatoes, and I'm finishing them off with a baked egg and a sprinkling of spring onions. Do you know how many hard-yolked egg-filled potatoes I ended up with before I finally figured out the trick to get the runny yolks? Six.

It was a carby type of day.

So we start by baking the potatoes, then cutting off the lids (we don't use them, so they're the cooks treat, preferably smothered in butter). The potato is scooped out and mashed up with butter, cheese and cooked bacon. 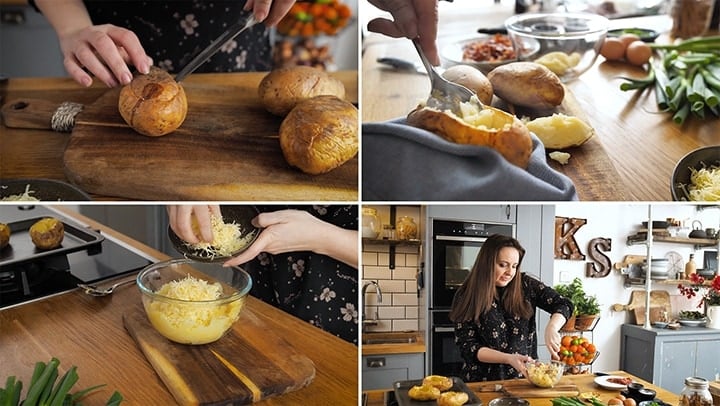 We then spoon this mixture back into the potatoes, shaping a well with the back of a spoon, and dropping the egg white into the potato. Bake for 10 minutes or so, until the white is nearly fully firm, then add the yolk and bake again for a few more minutes. This is just enough to set the outside of the egg yolk, whilst leaving it runny in the middle. 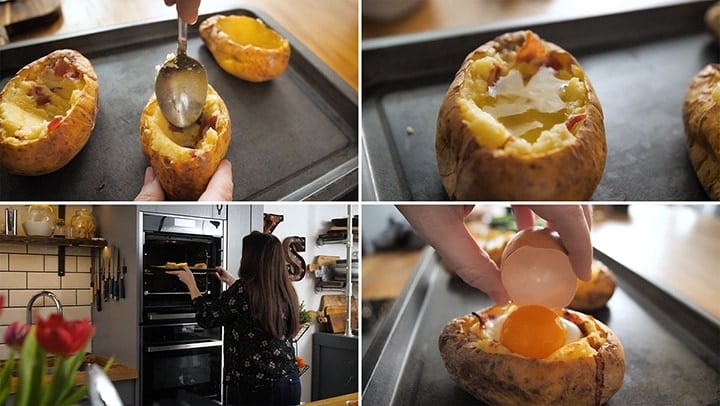 Top with a little more bacon, plus some chopped spring onions before serving. 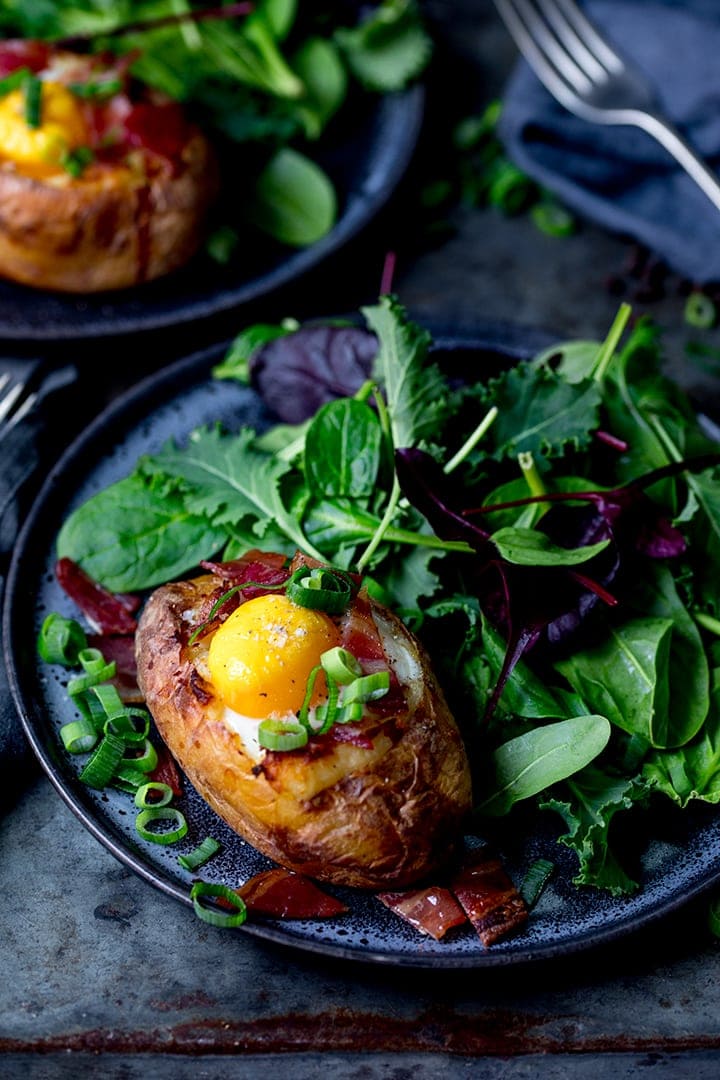 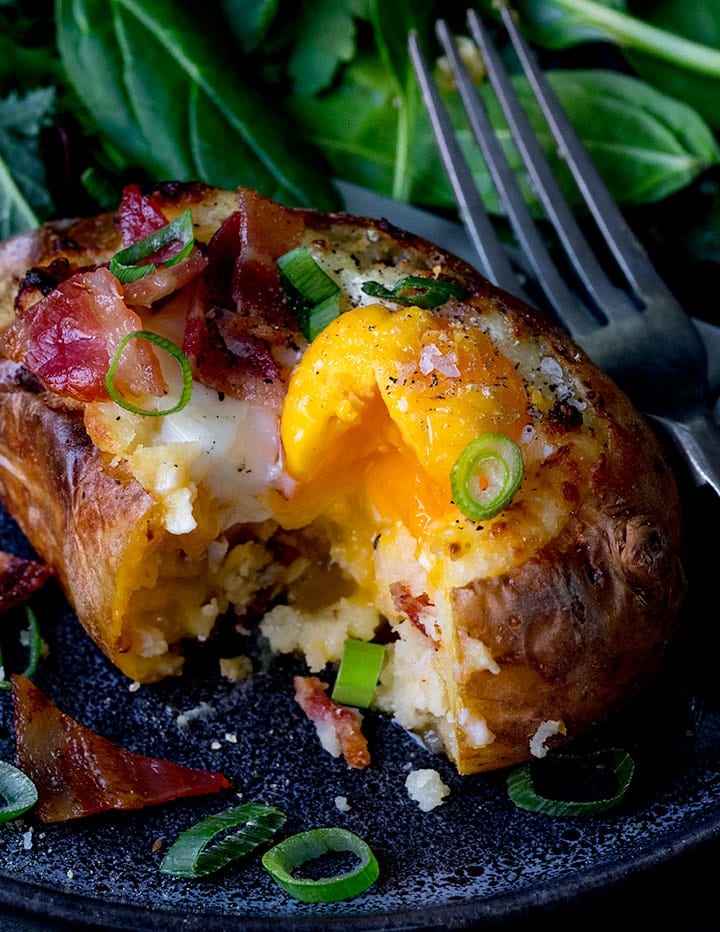 If you're a fan of potatoes, try some of my other potato recipes: 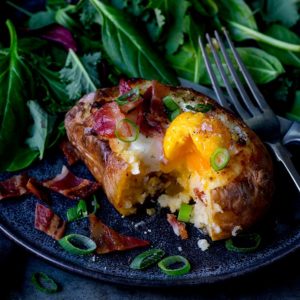 Getting a runny yolk

It's really difficult to get a runny yolk if you're baking the eggs without separating out the yolks. The main reason for this is that the potato insulated the egg white, so it takes time for it to get hot and cook through. If the yolk is sitting on top the whole time the white is cooking, it will not be runny. The yolk will probably also have a hard layer on top.
It's for this reason I separate the yolks from the white, to give time for the whites to cook through first. You can cook the white until they're almost completely cooked before adding the yolk (they'll finish cooking when the yolk is on top), or you can cook the whites until they're completely firm before adding the yolk (they can take another few minutes in the oven, no problem). .

Why prick the potatoes?

I've forgotten to prick my potatoes many times, and ended up with a potato explosion. They may explode in the oven, or explode on you when you come to take them out of the oven. And nobody wants scalding hot potato scattered all over them.
Prick the potatoes with a fork at least 3 or 4 times to prevent them exploding. .

You can use vegetarian cheddar and omit the bacon completely. Give the potatoes an extra little zing if you like by sprinkling on some smoked paprika before serving. .

Make the potatoes right up until the point you have filled them with the bacon-potato mixture.
At this point the potatoes can be cooled, covered and refrigerated for up to a day. Place the potatoes on a tray in the oven at 200C/400F for 10 minutes heat through a little before adding the egg whites and continuing with the recipe. .

Leftover tops of the potato?

Save them, and either fill them with any leftover mashed potatoes, or fill them with grated cheese. They can then be covered and refrigerated for up to a day, then grilled (broiled) for 4-5 minutes to heat through. Bonus potato skins!! . Nutritional Information is per stuffed potato.