This Greek Potato Hash works as a great side dish for BBQs - or eat it on its own - totally satisfying.  Make a Greek feast with some of my other serving suggestions below! 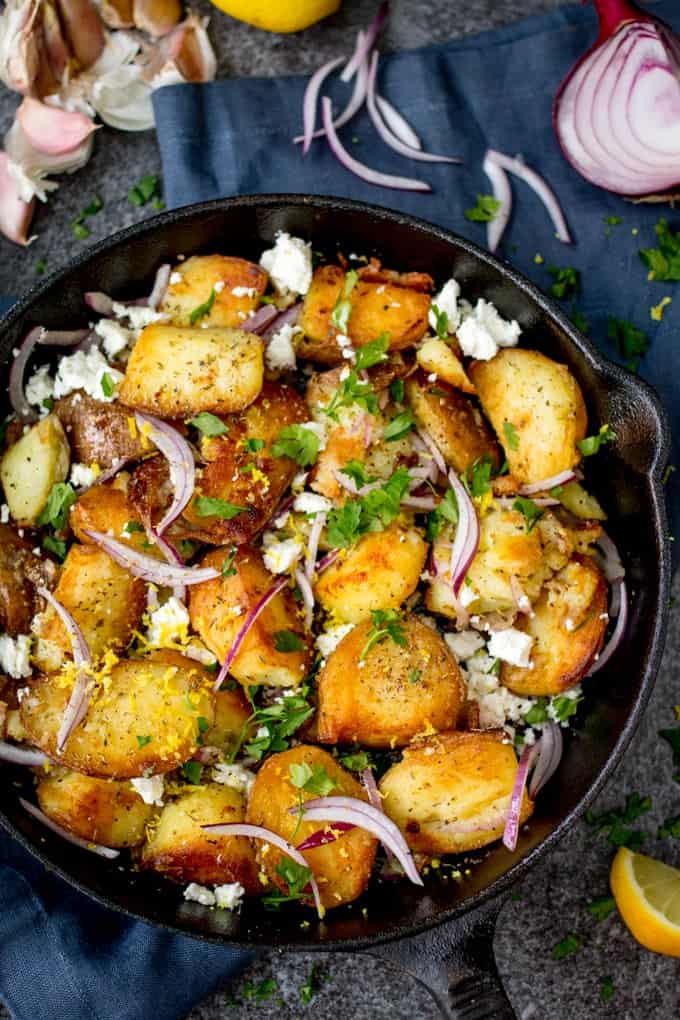 Can I classify this Greek Potato Hash as a salad? It looks a little salady (real word?) - after all there're some green bits in there....

This is my 'its-getting-warm-enough-for-salad-but-I-still-want-carbs' salad.  So good when you want something filling and tasty without being too stodgy.  I actually eat this all year round, especially with BBQs and with meaty Greek dishes like crispy pork gyros or this Greek lamb traybake.  Eaten on its own, straight out of the pan for lunch is perfectly acceptable too.  Just to save on the washing up of course. 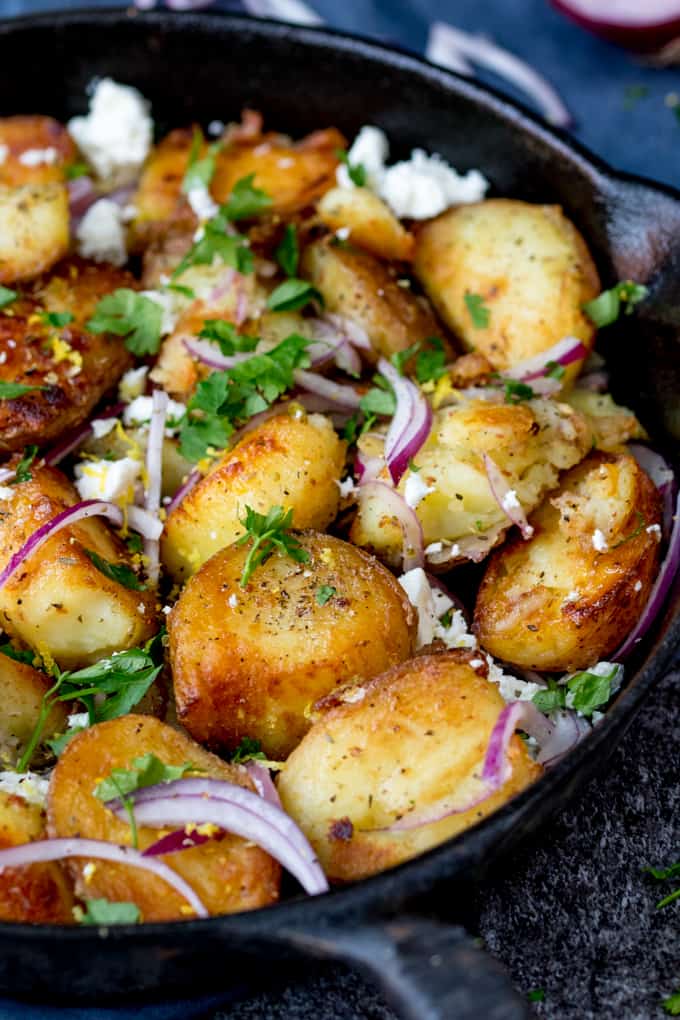 For this meal, you're going to need some potatoes that have been boiled so they're soft and fluffy around the edges.  I like to leave the skin on because it's easier, but you can peel it off if you like.  The potatoes are then squashed a little and fried in olive oil until crispy.  Next you're going to add the flavour kick.  Red onion, garlic, oregano, salt and pepper.  Cook again for a few more minutes, and then you're going to add the second flavour kick just before serving - feta, lemon zest and flat leaf parsley.

You may like to add some olives at this point too.  I'm still taking baby steps with olives, so I leave them out.  I finally found a variety I like (nocellara? they're like my olive training wheels), then ate about 50 of them in one sitting, and now they make me feel a little queasy to think about them.  Why can't I learn.  Blurgh.

Sunblush tomatoes may be a possible addition for an extra Greeky feel.  Tomatoes and potatoes though? Doesn't feel like a good combination to me (although you'd be right to point out that I do mix sweet potato and tomato in my ratatouille).

Whilst we're on the subject, have you heard of the TomTato plant?  Totally blew my mind that you can grow tomatoes and potatoes on the same plant.  Even though one is a fruit and one is a starchy veg, they both belong to the nightshade family, so you can graft them together and grow them in the same spot! Oh yes, Miss-Sucker-For-Advertising over here is definitely going to be trying that one.  Move over kids play house and toys! Mummy's growing TomTatoes!!

Sorry, back in the room now. 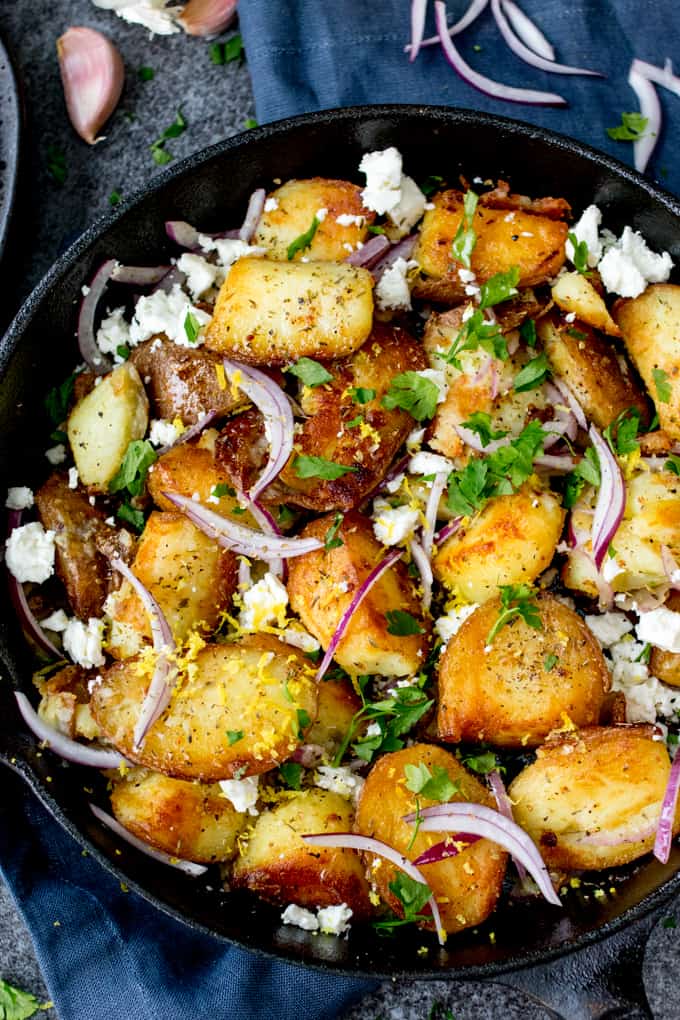 You can boil the potatoes for this dish in advance.  If you do boil and refrigerate them, then I'd suggest taking them out of the fridge for 10 or 15 minutes to let them get closer to room temperature before cooking so you don't have cold spots in the middle of your potatoes.  Failing that, just take them out of the fridge and mush them a bit more during cooking and give them a little longer.

In order to make this Greek Potato Hash recipe you will need: 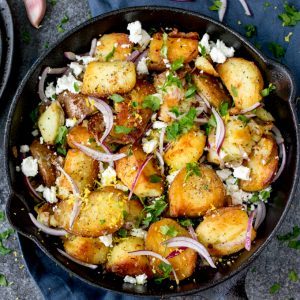 Can I make it ahead?

You can boil the potatoes ahead of time, then cool, cover and refrigerate for up to a day. It's best to bring the potatoes up to room temperature before frying them, so you don't get cold spots.  .

I love to serve these Greek potatoes as part of a Greek-style dinner with Feta salad, and a meaty main dish - such as Chicken souvlaki, Greek lamb or Pork Gyros. Sometimes I'll serve it as a side dish for a BBQ, or even alongside a cooked rotisserie chicken. . Nutritional info is per serving, based on 4 small servings.

Originally published September 2014. Updated May 2018 with new photos and a video, plus extra tips.
Ok, ready for the old pic from this post - taken back in September 2104? Here goes: 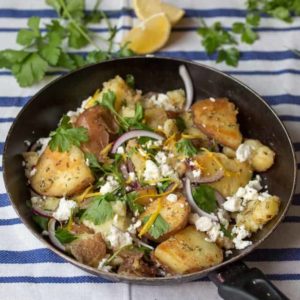