A beautiful Artisan bread with a soft interior and a light crispy crust.
Using 5 ingredients, this bread is easy to make. I'll share the secret to getting a lovely craggy top WITHOUT having to slash the bread with a knife. This recipe uses a Dutch oven, but I'll show you how to get great results without one too.
Lazy lunches with soft, warm, crusty buttered bread or serve it toasted for breakfast, slathered in jam. It really is the best.

I've finally cracked the code to making bread that not only tastes fantastic but looks so pretty too!
And now I can't stop making it.
Well, actually I have stopped making it for a little while because I ran out of flour and yeast.
But hopefully, it will arrive with my next shopping delivery 🤞

After a whole lot of testing, I'm sharing all of my tips to get the best possible result.
As a heads-up this bread:

What do we need?

How to make this Artisan Bread

Full recipe with detailed steps in the recipe card at the end of this post.

What to serve it with

Why use a Dutch Oven?

The thick sides and base of a dutch oven help to ensure even baking of the bread, whilst also providing a sealed environment to trap in steam. It's this steam that helps bread to rise to it's full potential (with a little support from the sides of the pan).
The steam helps to prevent the crust from setting on the bread right away. If the crust sets immediately, then the bread can't rise and you get a heavy, dense loaf.
Ensuring the crust stays soft initially helps the bread to continue to rise so you get a lighter, softer bread.
The lid is removed for the last 10-15 minutes of baking to allow that crust to crisp up and turn beautifully golden.
Leaving the lid on would result in paler bread with a chewier, rather than crisp, crust.

Can I use a regular pan?

Yes, you can use a large (approx 25cm/10" diameter), oven-proof pan with a well-fitting lid.
As the sides aren't as thick, and the lid isn't as heavy as a dutch oven, you will get slightly different results.
I've done a comparison image below. The middle column of images shows bread baked in a regular pan.

This is likely because more steam was able to escape from the pan, so the crust of the bread set a little more quickly.
It still tasted great, just slightly less fluffy.

Can I cook in the oven, on a tray, without a pan?

Yes you can, but you'll need to add steam into the baking process.
For this:

As you can see in the comparison image below, the column on the right shows the results of baking the bread free-form on a flat baking sheet, with a water bath in the oven.
The bread rises more unevenly, and is more dense in some parts.

The seam still opened up quiet nicely (the steam from the water bath helps with that) and the flavour was still very good, but the bread was a little more dense and the crust was more crunchy - this is likely because the bread is exposed directly to the heat of the oven, rather than being protected in the pan.

Why use a proving basket?

I love to use a proving basket to get that lovely stripy flour pattern on the bread.
It also helps the seam of the bread to open up more during baking, as the seam isn't as constrained during the second prove as it would be if it was placed in a flat bowl.
So you can do your second prove in a large bowl that's been floured, but it won't get those nice rings and it will be a little flatter on top.
It will still taste great though, and will still have a crisp exterior and fluffy interior if baked in the dutch oven.

Why do second prove seam-side down?

Those folds/seams we made when shaping the bread will end up as the top of the bread, as you'll be tipping the bread out (to land the other way up) onto baking parchment.
Those folds will open up slightly as the bread is baking, leaving you with a lovely slightly craggy crispy top. I got this tip from Life as a Strawberry and it works great!
Baking the loaf seam-side up also means you don't need to slash the bread with a knife to get an 'Artisan' look to the bread. I hate slashing bread, as I always worry I'm going to knock the air out of it, or I find the knife sticks and I have to drag it back out.
Added bonus: If you use a proving basket, this gives those folds a little more room (so they're not quite as compacted) during the second prove, so you'll get more of a craggy top.

Enjoy making your own bread? Try these too:

Watch how to make it 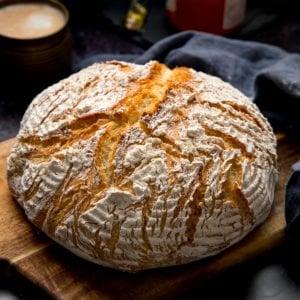 Can I prove it overnight? Yes, do the first prove covered, overnight, in the refrigerator, then remove from the fridge, shape and do the final 30-minute prove at room temperature (ensure it's a warm room or warm area of the room) before baking. Can I skip the kneading process? Kneading really helps the gluten development, which will make the bread softer and with a better rise and more 'spring'.
If you don't want to knead the dough, you'll need to prove the dough overnight (rather than for an hour) to give the gluten more time to develop.
See instructions above for proving overnight.

How long will it last?
The bread tastes at it's best if eaten in the first 24 hours.
If you know the whole loaf is going to be eaten quickly (within 10 hours or so) there's no need to cover the bread. Just place on the chopping board cut-side down (presuming you've already cut into it). This will help to keep the crust nice and crispy.

If you know you want to make the bread last until the next day, then wrap in foil once cooled and store are room temperature.
The bread will still be good for up to 2 days, but it gets less soft after 1 day.
Can I freeze this bread?
Yes, once cooled, slice the bread and freeze, then defrost individual pieces at room temperature.
Can I use regular active dry yeast or fresh yeast instead of instant yeast? Yes:
Replace the 2 tsp (7g) instant yeast with 2.5 tsp (9g) active dry yeast.
OR
Replace the 2 tsp (7g) instant yeast with 2tbsp (18g) of fresh yeast.


Why are you not using bread flour? I find that plain (all-purpose) flour gives a slightly thinner but crustier exterior than bread flour. This gives it more of an artisan feel.
Bread flour has a higher protein content, - which makes the dough more springy and chewy, with a thicker, chewier crusty.
You can replace with bread flour if you prefer. If you do, you'll need to add about 2.5-3 tbsp more water - as the bread flour absorbs more water. Nutritional information is per slice (approx 12 slices in this bread).