This Winter Spiced Pecan Caramel Cheesecake is an ideal dish for a celebration party table! 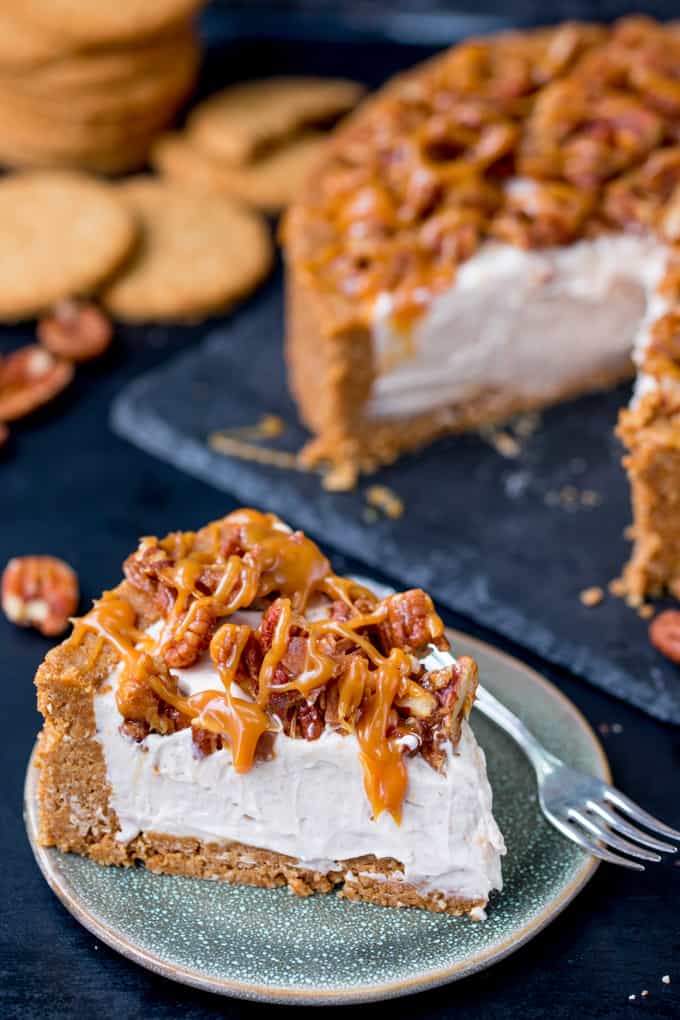 I made this cheesecake a couple of weeks ago based on a freelance recipe I did last year. I was craving crispy candied pecans (it’s a good idea to make double the amount needed for this cheesecake, just for snacking purposes!) and this recipe jumped into my head.

A few adjustments later – to give it more of a winter feel with some warming spices, and also to convert to gluten free for my mum-in-law, and yessss! This sweet, crunchy, creamy dessert was done. Made ahead of time and ready to serve (minus the tiny test slice for photography purposes….. ????????). 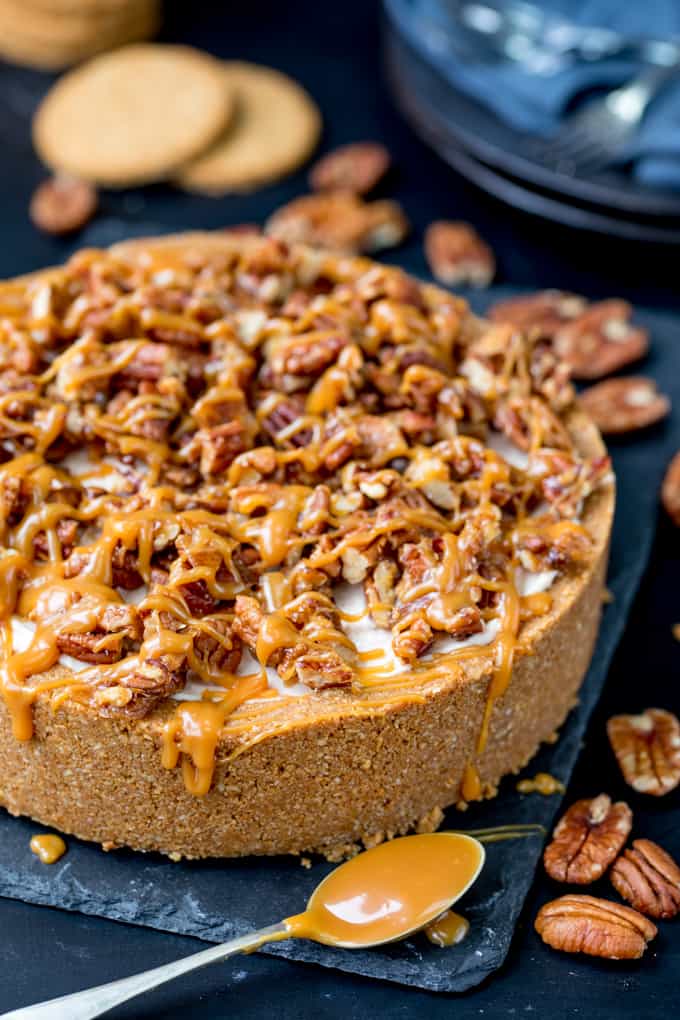 We were having family round to dinner, so I thought I’d use them as guinea pigs to trial my leftover Turkey Tikka Masala (look out for that recipe this weekend).

I also made my beef rendang and a huge salad with creamy curry-spiced dressing (the same dressing I used in this fennel and apple salad).

It’s definitely worth noting that if you’re going to a food blogger’s house for dinner you should expect the following:

I managed to hit 4 out of 5 of those points for this last get together. My poor family!! 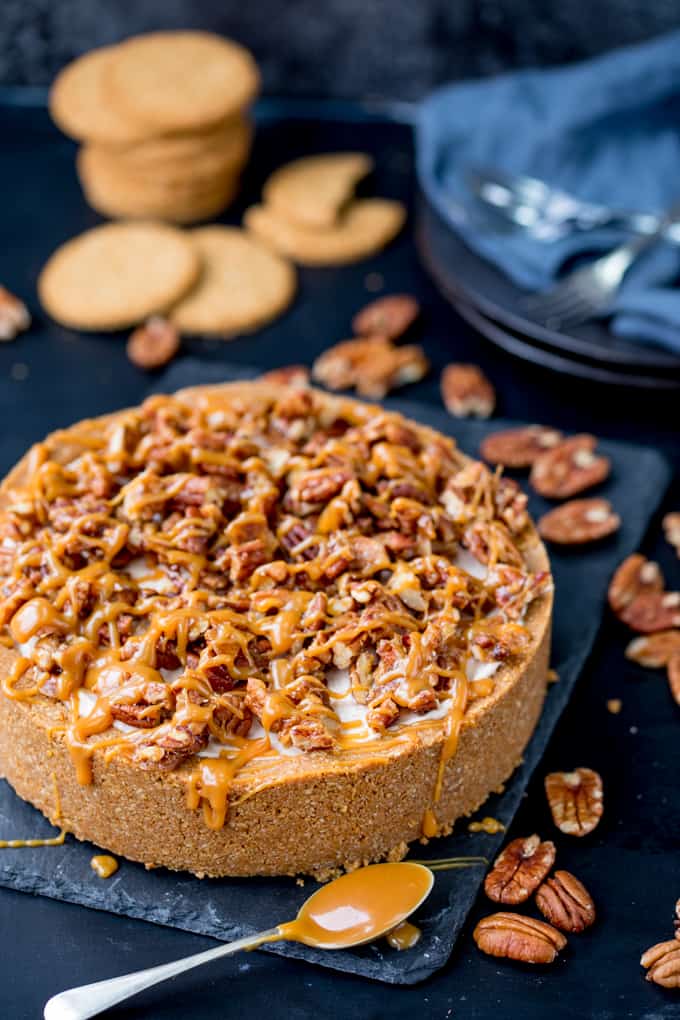 Nevertheless, it all got eaten, and everyone left with full bellies.

The cheesecake was that perfect ‘I’m too full to eat, but I’ll just have a small slice. No, a bit more…..’ dessert (that everyone somehow managed to squeeze in).

A classic no-bake filling, spiked with winter spices such as cinnamon, nutmeg and ginger, all piled into a gluten-free oat-biscuit base. It was actually more of a case than a base. Can’t get enough of that buttery biscuit-ness!

Here’s my tip for getting even, level edges for that case (I served up many a wonky cheesecake before I started doing this) – use a measuring cup and a teaspoon to push and level: 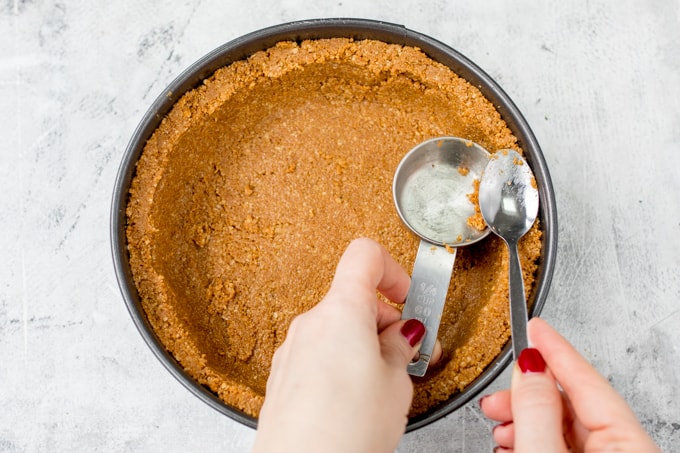 The pecans are simply cooked with sugar and a little butter until the sugar melts and lightly coats the nuts. Once cooled, they’re perfectly sweet and crunchy! 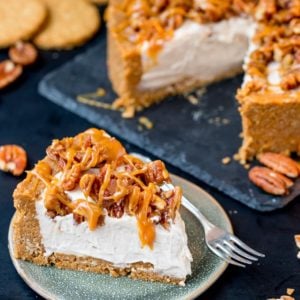 * If refrigerating for more than a couple of hours, keep the cheesecake covered with clingfilm. Remove from the fridge 30-60 minutes before serving to soften the biscuit base slightly. . Nutritional Information is per serving.