These Chocolate S'mores Baked Doughnuts are delicious! The basic recipe for these oven-baked doughnuts is my favourite! Light, fluffy doughnuts every time! 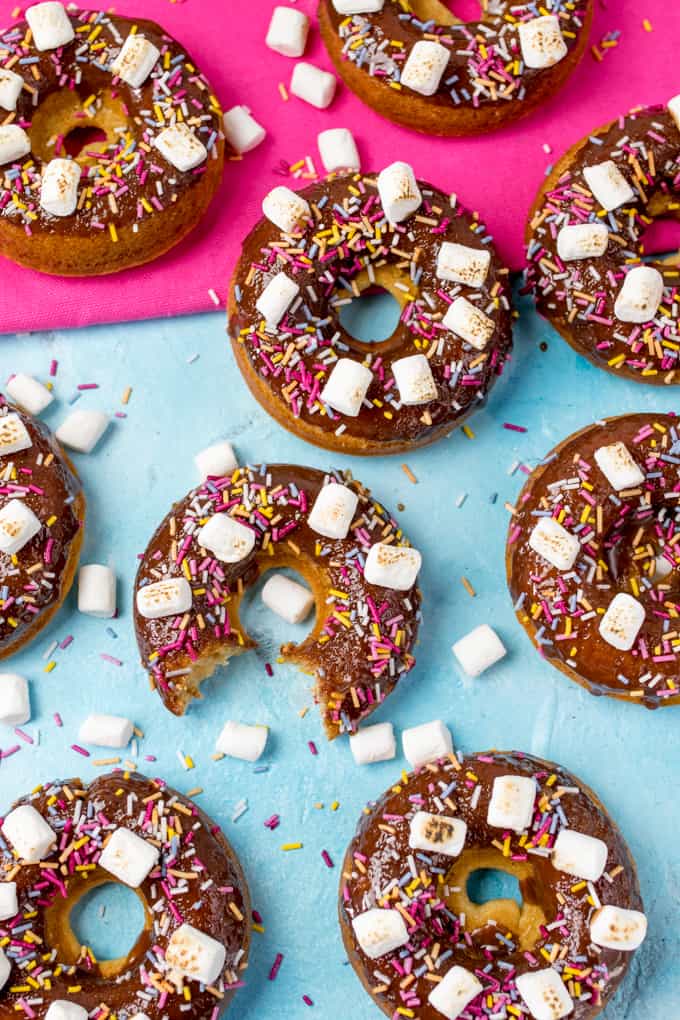 This recipe was created in collaboration with Num Noms as part of their #NumNomsCrazyCreations campaign.

S'mores baked doughnuts are totally dangerous. A little nibble every time someone walks past the box in the kitchen, and twelve can be gone in less than 24 hours.

That might be ok for a family of six, but there are only four of us!

When Num Noms asked me to create a recipe based on their new Series 3 characters, I honed in on the doughnut and marshmallow straight away. I was sent some Num Noms so I could take a proper look, and the kids had them off me in no time, so in fairness it was a bit of a rushed decision (but definitely the right decision!). 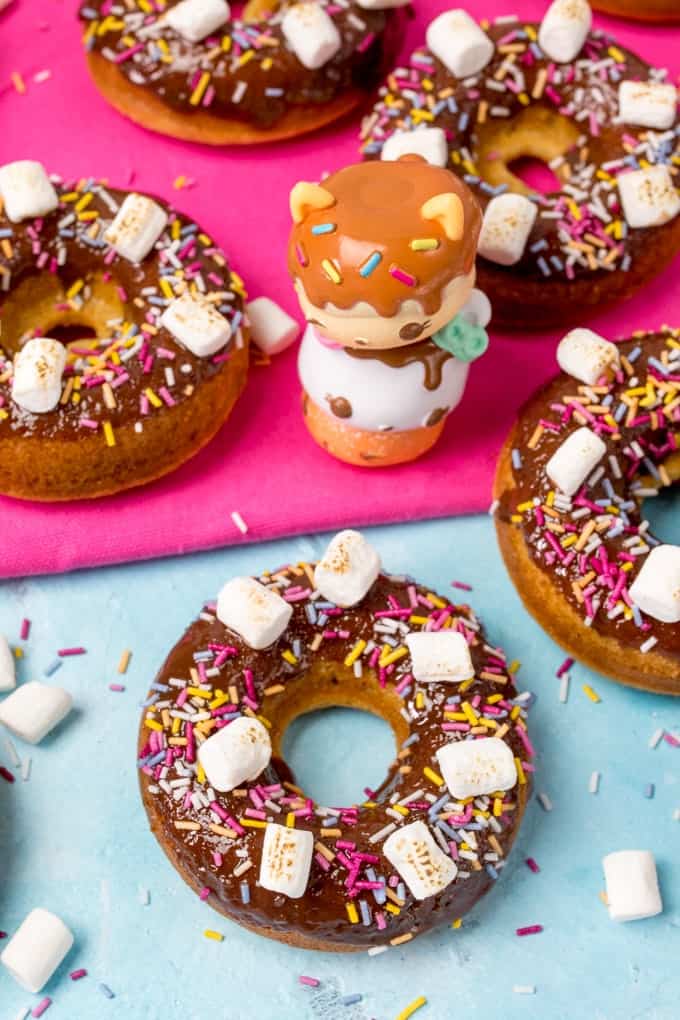 By the next day the kids had written a script and were filming their own Num Noms stop-motion animation (I'll have to share it with you guys once they've completed the voice-over bit - it's so cute!). I'm pretty sure I just used to play with my barbie, or maybe my cassette tape collection at their age. I guess times change!

The doughnuts are light and fluffy - made with Greek yoghurt and coconut oil - which makes them so tender!
Whilst fried doughntuts are awesome (like these raspberry ripple ones), they take time - what with all the dough proving and kneading.

The dough for these doughnuts is ready to go in five minutes - just pipe it into a doughnut ring tray (a MUCH neater result when you pipe it in, rather than spoon it in) and bake them in the oven. 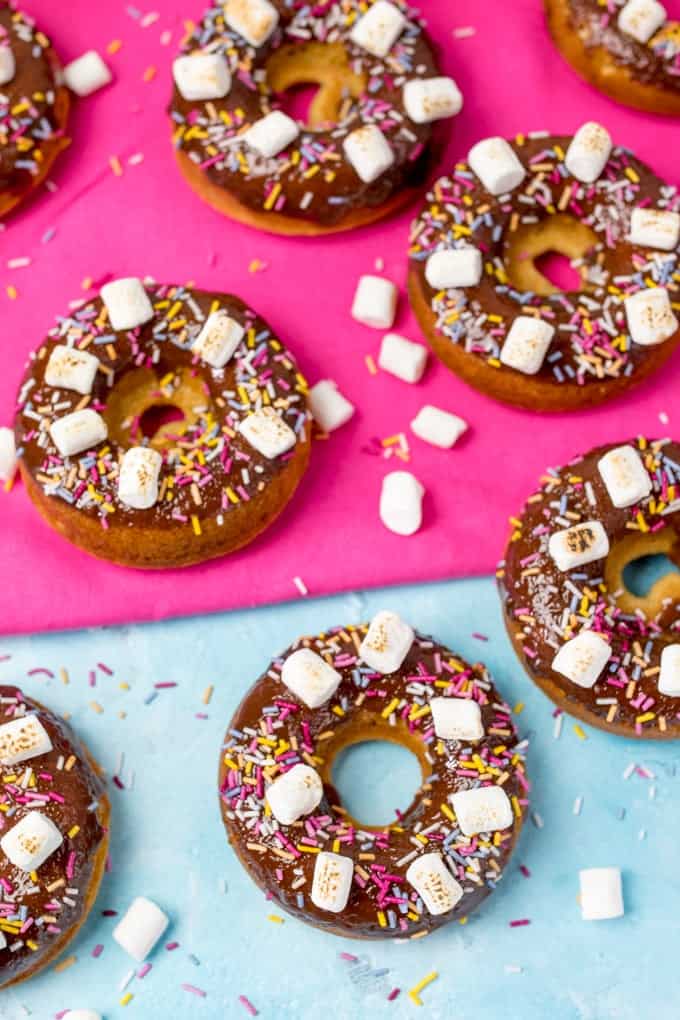 I make a dreamy chocolate ganache for the icing. Just heat some cream and add chocolate. Leave to melt then stir - and that's it! Creamy, chocolate ganache - perfect for doughnut dipping (and strawberry, banana, breadstick and marshmallow dipping too).

I like to top with mini marshmallows, then scorch them slightly with a cooks blow torch. That's totally optional though - they taste great even without blow torching them. Unfortunately you can't put them under the grill/broiler to char, otherwise you're at risk of burning the chocolate ganache. If you did want to grill them, then I'd suggest covering the doughnuts with marshmallows, to protect the chocolate (more marshmallows is never gonna be a bad thing).

Go crazy with those rainbow sprinkles! 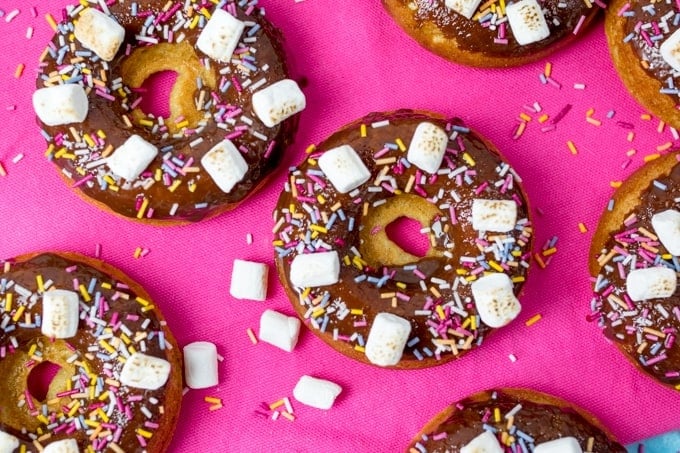 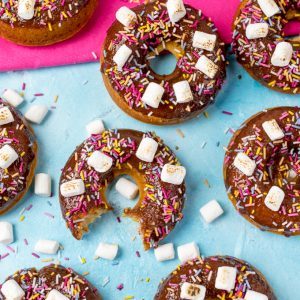 Nutritional Information is per doughnut, without marshmallows or sprinkles.

END_OF_DOCUMENT_TOKEN_TO_BE_REPLACED
« 10 Ways To Use Up Leftover Easter Eggs
Amatriciana Pasta »