These Sweet and Salty Kale Chips are a quick, simple and skinny snack at 118 calories per serving. 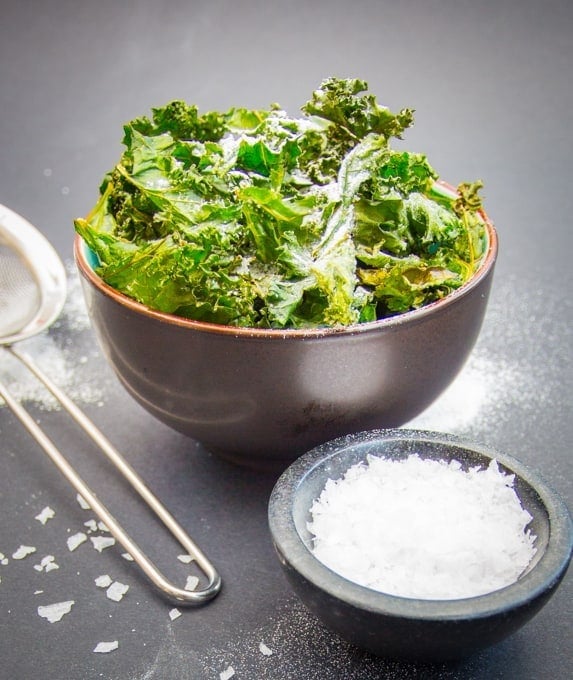 Ok, I’m a little slow to jump on this kale bandwagon.  Up until a few months ago, kale made a rare appearance as part of a roast dinner and that was it.

I was vaguely aware of the kale hype in the US, but hadn’t really noticed it in the UK.

That all changed when I started making green smoothies and my rainbow smoothies using the stuff, and now I’m a convert.

I tried replacing it with lettuce once in my breakfast smoothie.  Blurgh gag.  Don’t do it.

So today, the kids went back to school.  I’m sat at my laptop, in the house by myself for the first time since I finished work.  I was congratulating myself having earlier been out for a run (‘proper’ exercise is generally cause for celebration for me) and thinking about how healthy that one run makes me.  Then the snack devil hit me.  I wanted a biscuit or a nice big piece of chocolate.  This is what I was afraid of.  Being in the house, so close to the fridge.  How am I going to stop myself from grazing allllll day?  I’d had my morning smoothie, I’d had some fruit.  What could I nibble on that isn’t hugely calorie laden?

I’d seen recipes for plain or salt & vinegar kale chips, but they didn’t really take my fancy.  So I made the chips in the usual way that I’ve seen all over the net – just a case of massaging some olive oil into some kale leaves and cooking on low for 15 minutes or so.  They tasted ok.  With the addition of the salt and sugar though? Yes!!

I was a little worried that sprinkling sugar on the cooked kale would just feel like you’re crunching granules of sugar.  I expect that cooking the kale with the sugar on though, would just result in chewy leaves (has anyone tried this?).  So I went for a combination of half caster (super fine) sugar and half icing sugar (powdered sugar). 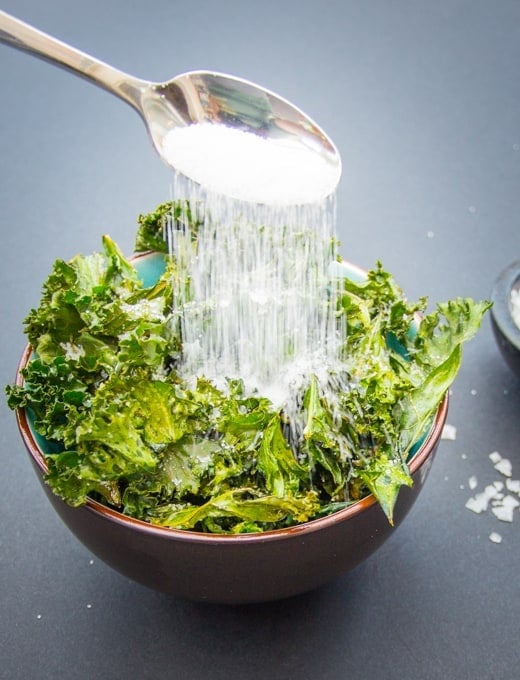 They turned out great and I sat there and ate a whole bowl!

Looks like I’m going to have to start upping my kale shopping!

I’ve just noticed that I’ve been referring to them as chips throughout this post.  I probably should call them crisps, since I live in the UK.  Kale crisps? Nah, just doesn’t sound right! 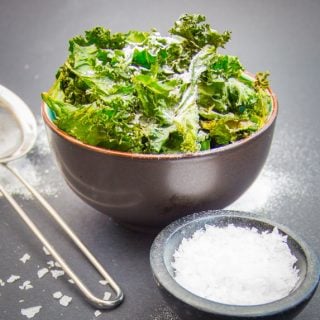