Buttery Kale and Bacon Mashed Potatoes makes a great side dish – or even a meal in itself! 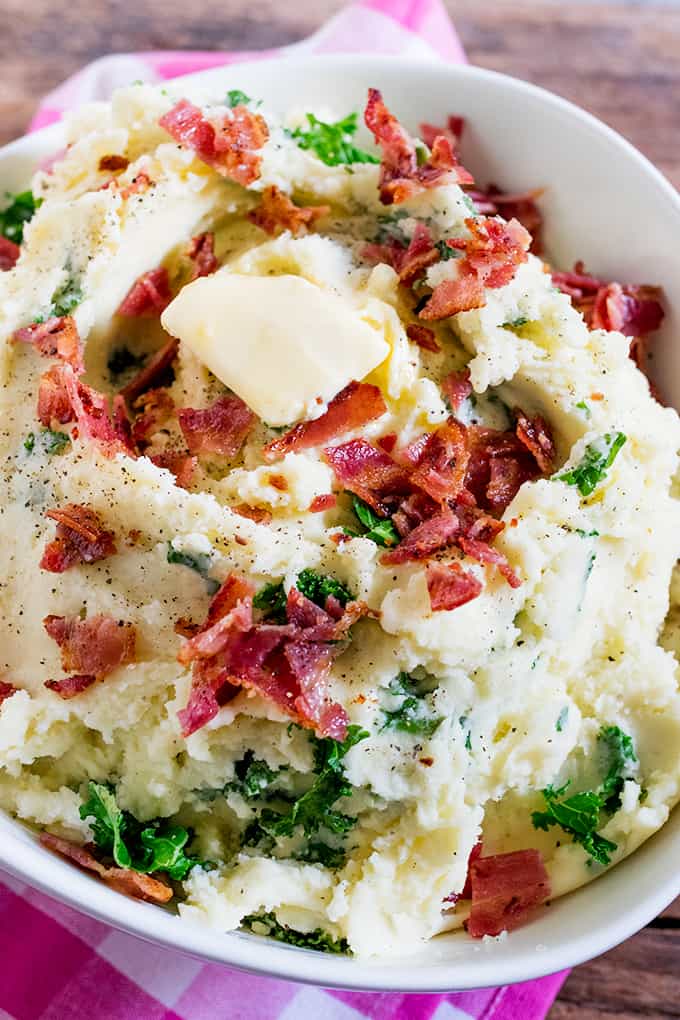 My mum used to call me a mash-oholic when I was little.

Out of a whole roast dinner, it was the thing I most looked forward to. I could happily ignore the meat and veg, and just pour a huge ladle of my mum’s delicious gravy over my mash to slurpily enjoy what she called mashed potato soup.

As I got a little older and started cooking in the kitchen myself (we’re talking maybe 11 or 12 years old now), one of my favourite ‘meals’ to make myself was mashed potato with bacon bits, finely sliced raw onion and gravy. Sounds a bit weird I know, but if I didn’t have to act like a grown up, I’d still make that for myself now.

So now that I actually am a grown-up, and mashed potato soup would be frowned upon as a balanced meal, I like to serve this Kale and Bacon Mashed Potatoes version:

Buttery mash, bacon bits and lots of vibrant green kale. It’s heaven served up with a roast dinner or with the sausage and bean casserole I made last week. Probably still not balanced enough to call it a meal in itself, but that won’t stop me from reheating any leftovers for supper.

I could probably get way with calling this colcannon, although some versions call for spring onions (scallions). The fact that I had to look up exactly what went into Colcannon stopped me using the name. So it’s just Kale and Bacon Mash 🙂

Serve it up with your regular Sunday roast, or make it as part of your Christmas or Thanksgiving dinner. Just make enough for leftovers! 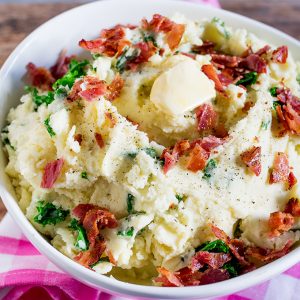 Buttery Kale and Bacon Mashed Potatoes makes a great side dish - or even a meal in itself! Perfect as a side dish for Christmas or Thanksgiving.
5 from 1 vote
Print Rate Pin The Recipe For Later
Prep Time: 15 mins
Cook Time: 20 mins
Total Time: 35 mins
Course: Sides
Cuisine: British
Servings: 12
Author: Nicky Corbishley